The Bowman Heavy Mech was built to unleash massive damage, with having to deal with over heating issues as much as other Mechs, both of the same class, and that of heavier classes. The Bowman is the slowest of the Heavy Mechs, making it vulnerable. However it does have JumpJets, which are longer lasting than seen on other Mechs. The Bowman is more fire support than Mech. The Hammer Missiles are generally spammed by Pilots rather than making use of the Lasers and it's less powerful Machine Guns. Lastly the Bowman is normally avoided if identified by other Pilots due to the Missile set that it carries.

The Bowman is slower then the typical Heavy Mech, trailing behind in the speed catagory, the Bowman should rely on it's JumpJets, which last longer then any other Mech that has them. This sustaned flight capablity should be exploited. Allowing the Mech to hide behind a hill, fly up to see over the hill, set up a shot and fire. Other than this, the Bowman has Reactive Armor Shielding, which stops 70% of all incoming damage from Ballistic based weapons. This ability should be activated when fighting Mechs with Ballistic based weapons at it's primary Weapon, notable in this: The Beliall, Cougar, Timber Wolf, Ymir, and to some extent, the Prometheus. 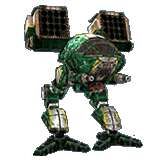