"With the Mad Cat, we may have the upper hand" - Major Natalia

One of the more popular 'Mechs of the game, the Mad Cat is also one of the first 'Mechs to appear in the Inner Sphere. It is one of the most expensive 'Mechs to build, but worth it. Through time, it ceased to be manufactured. Its weapons platform is very powerful and devastating. The Mad Cat can travel at speeds of up to 20 M/h (32 Km/h) and weighs in at 75 tons, with twin PPC cannons and the two large missile launchers on its shoulders, firing 4 missiles at a time total. Also, the Mad Cat comes with dual Machine Guns allowing for damage to continue if the 'Mech is overheating.

The Mad Cats that appear in the MechAssault series are a variant that does not appear anywhere else in the BattleTech universe. The MechAssault Mad Cats have an entirely original weapons configuration that does not resemble any other documented variant of the Mad Cat Mk II or it's forebear the Timber Wolf.

The Mad Cat's dual PPCs are its primary weapon, and should be treated as such over its quad Javelin Missiles. The PPC's should be used at medium to long ranges, as they need time to make a turn with their auto-tracking ability. At closer ranges, they may just miss. Its missile launchers, one attached to each shoulder, should only be specifically used at long ranges, as the Javelin missiles accelerate well in flight. This leaves the weaker, dual Machine Guns for close range targets. Strategically, the Machine Guns should be used when the 'Mech is starting to overheat, since these weapons produce the least heat out of all the others.

The Mad Cat is not very fast, but instead should rely on its dual PPC's and quad Javelin Missiles and engage enemies at longer ranges where it will be more effective. Both the PPC's and quad Javelin Missiles will create large amounts of heat extremely quickly after repeated shots. Standing in water will increase the rate of cooling, allowing more shots to be fired. This 'Mech is one of the few to tote the Target Jamming ability, which prevents all weapons from locking onto it. This is especially useful for weapons that use seeking technology, such as the Javelin and Crossbow missiles.

Backside of Mad Cat clearly shows it has unused JumpJets 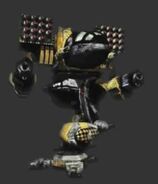