"He's been unusually quiet lately, as if he senses something coming." - Foster

The MechWarrior, more commonly referred to by his rank of Captain, was a member of the Wolf Dragoons Mercenary Group. He was the protagonist of the MechAssault series.

There is no information to be found in game about who the MechWarrior is. Not even his name is stated. However in early concept art for MechAssault 2: Lone Wolf, he appeared to have the name "Adams" stenciled across his suit's chestplate, and throughout the trailers for Lone Wolf he was shown with the word "Wolf" holding the same place. Weather this was intended as his name or simply as a badge of pride as a member of the Wolf Dragoons is unknown. This design choice was ultimately cut from the final game.

As a member of the DropShip Icarus' crew he was a member of Bravo Lance, and due to his rank he may have actually been Bravo Lance's leader, though there is no other evidence to support this. After both Bravo and Alpha Lances are destroyed in that order, he is the sole surviving mechwarrior of the Icarus' crew, thus crowning him with the unofficial nickname "Lone Wolf".

It is indicated in MechAssault that the Captain and Major Natalia Kerensky have known each other for a very long time, having worked together during many previous operations. It is also implied that Natalia and the Captain are romantically involved, or that Natalia is interested in him. This is evident due to her occasional flirtatious attitude towards him and various pet names for him, in addition to comments made during the briefing segment of the mission Sailing Away that imply they spent the previous night together.

Although he does not directly interact with Foster on many occasions outside of mission briefings, it is also implied that he treated Foster as a good friend and socialized with him often off camera, apparently going out drinking with him while hiding out on planet Dante.

The Captain does not have a character model in the original MechAssault, as the entire game is either seen directly from his point of view or in third person while piloting his 'Mechs. In Lone Wolf however, he appeared to be a tall and muscular Caucasian, clearly taller than Foster. His face is never completely exposed.

The Captain expressed absolutely no personality while on camera, and had no spoken dialogue in either game, although it is stated on at least one occasion that he was quite talkative off camera in the first game only to become very quiet and introverted. Foster also logs that the Captain was struck with bouts of insomnia after the conflict on Helios.

The MechWarrior, as his title implies, was a highly skilled 'Mech pilot. His skills were not restricted to his 'Mech alone, as he was also capable of piloting tanks and VTOLs. In addition, he was also prolific at hacking into security systems, and was trained in the use of explosive ordinance. 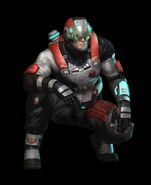 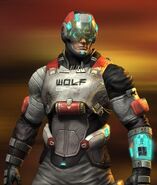 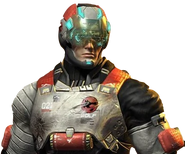