The Ragnarök was captured by Lt. Foster, Major Natalia, and the MechWarrior on the planet Helios. This 'Mech is one of the most powerful 'Mechs in the game. Several of its weapons and defensive technologies are of LosTech origin. In MechAssault 2, the Ragnarök was used for the Nemesis SuperMech Army. The Ragnarök and its variant the Ymir are the only Assault Mechs that are not capable of performing an Alpha Strike. This is most likely to prevent the Ragnarök from being too overpowered in gameplay.

Built using LosTech technology, the Ragnarök has weapons and defenses never before witnessed until now. The most obvious of which being its Lava Gun. The Lava Gun fires three extremely large slugs of super-heated material from the cannon mounted to the right shoulder of the 'Mech. The slugs have no tracking ability and so are not useful at long ranges (even though this is quite obvious since the projectiles explode after a certain amount of time). Also, the slugs are capable of knocking over other 'Mechs, and have a large blast radius. The Ragnarök is equipped with quad Javelin missile launchers attached to just to the left of the cockpit. Finally, twin Gauss Rifles are fired from the arms of the 'Mech, also capable of knocking over other 'Mechs.

Adept Strader used the Ragnarök to fight MechWarrior after setting a doomsday device. MechWarrior beats Strader and the Ragnarök explodes, destroying Strader's dropship. From the ruins of the dropship, it is revealed that the Word of Blake had two Ragnaroks. MechWarrior pilots the second Ragnarök to stop the doomsday device, which is a laser drill. This was the only option Natalia and Foster had since the  Icarus was still unable to leave orbit. MechWarrior tried attacking the drill until he drove the 'Mech into the drill and commenced a self-destruct. He ejected from the Mech as the drill collapsed and the world was saved.

The 'Mech makes its return in MechAssault 2: Lone Wolf, where it is used for the Word of Blake's SuperMech army, which was meant to be powered from the data cores scattered around the Inner Sphere. The only chance to pilot the 'Mech in the campaign however, is in the mission succeeding "Skin the Cat." The 'Mech army is also seen in cutscenes before arriving to the planet Terra. And the last time the 'Mech is seen is after the MechWarrior defeats the final boss of the campaign, when the SuperMech army abruptly comes online.

Ragnarok was sacrificed to destroy the Planetbuster

Strader kept his Ragnarok in it's own secure bay 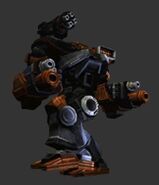 The Captain ejected with the Ragnarok's cockpit