The Thor Heavy BattleMech totaling 70 tonnes is still fast for its weight. Traveling at top speed of 30 Mph and being great for leading attacks when other friendly Mechs are present. Also good at defending key points on the battle field, the Thor is an all round Mech with no weaknesses. Also equiped with a Jump-Jet allowing for maneuverability over rough terrain. (Hint: Use against the Spider Mech boss in the second game because you can dodge attacks with the jump jets unlike the Mad Dog)

The Thor comes equiped with quad Machine Guns which wrecks armor at close range, and a dual Crossbow Missile launcher rack that's mounted on the left shoulder, for close range combat. At longer ranges, the twin Medium Lasers that are fired from the cannons attached to the arms for medium to long range engagements. While this mech is suited to fight at all ranges, in most cases it is best suited for close range combat, where it can shred opponents with its quad machine guns producing massive damage with minimal heat being produced.

In MechAssault 1 the Thor has the Target Jamming ability which stops any tracking projectiles from homing in on the Thor. In MechAssault 2: Lone Wolf, it has the Reactive Armor Shielding that stops 70% of damage from ballistics based weapons. Equipped with Jump-Jets a well time burst will cause even Javelin missiles to miss. 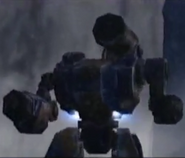