The first aircraft that players can fly, the Vertical Take-Off and Landing vehicle, or VTOL for short is used as the supply runner in Multiplayer.

The VTOL can use a landing pad to pick up and store salvage in the form of Armor, Energy, Missiles, and Ballistics and drop them off during battle for other players to pick up. Picking up Missiles at a landing pad will upgrade the dual crossbow Missiles on the VTOL. In addition to being able to store salvage, the VTOL can also store both explosives, which can be dropped as bombs, and deployable turrets that will attack enemies.

In addition to the storage, the VTOL has a cargo lift which can pick up and transport a Rhommel Tank MK. II, and deploy it anywhere on the battlefield. Lastly the VTOL has BattleArmor attachments which function the same as the Cargo lift, where a user in a BattleArmor can JumpJet up to a VTOL and grab onto it, letting it travel around the battle field at high speeds. When the BattleArmor attaches onto a VTOL its Pulse Laser is upgraded to level 4, which can only be achieved by riding on a VTOL. The upgraded Pulse Laser does more damage than the level 3 upgrade, shoots faster, and never overheats.

The VTOL that appears in Lone Wolf was created specifically for the MechAssault series and has made no other appearances in the BattleTech universe. The Lone Wolf VTOL was later retconned into the main BattleTech canon as the prototype to the Aeron Strike VTOL which entered production in the year 3082, almost 15 years after the events of the MechAssault series, and would become the most widespread VTOL in use.

The VTOL was created specifically for combat support and resupply, and not for direct combat. Being equipped only with dual Crossbow Missiles, the VTOL's offensive options are limited. Therefore if the VTOL is going to go on the offensive it is suggested to:

The VTOL can fly, that is more than what can be said for 'Mechs, even if they have JumpJets. The VTOL's speed and ability to climb can be it's best attribute, as it can stay outside of the effective range of most weapons systems. However, it does not have much armor and can be knocked out of the air after taking only minimal fire. Transporting other vehicles should be the priority of the VTOL rather than directly engaging enemies. Carrying the BattleArmor which can engage enemies while the VTOL flies can prove to be the most effective means of defense.

Effective weapons against the VTOL include Auto Cannons, Medium Lasers, and Gauss Rifles as they have long range and are impossible to avoid due to their velocity, with PPCs being dangerous as well. Javelin Missiles are easy to avoid, and it is difficult for Crossbow Missiles and Warhammer Missiles to lock on to the VTOL if the pilot keeps a distance. Pulse Lasers can endanger the VTOL if fired in flurries, but can also be easily evaded from a distance. Machine Guns are ineffective due to their extremely limited range. 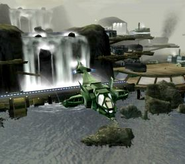 The red VTOL model that appears only once